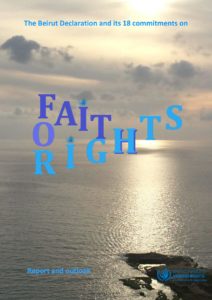 Since 2012, the United Nations has taken an interdisciplinary approach to reflection and action on the profound links between religions and human rights through the Faith for Rights Network. 18 commitments were articulated in the 2017 Beirut Declaration to strengthen the universal right to freedom of thought, conscience, religion, and belief under international law. The most recent publication is the #Faith4Rights toolkit, which builds on a wealth of similar tools from several UN agencies. It also describes artistic expressions as learning tools for democracy and human rights and provides links to relevant resources.

Sources: The 18 commitments on “Faith for Rights” (PDF) are available in several languages.