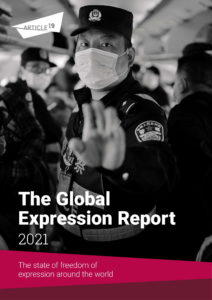 “Two out of every three people in the world – 4.9 billion people – are living in countries that are highly restricted or undergoing a free expression crisis, more than at any time in the last decade.”: ARTICLE 19 has published its Global Expression Report 2021 (GxR21). The report looks at the continued targeting of journalists, bloggers, human rights defenders and political activists around the world, as well as the impact of COVID-19-linked restrictions on citizens everywhere.

On September 17, Robert Wilson’s theater production of OEDIPUS opened the MITEM Festival in Budapest, whose general director is Attila Vidnyánszky, who was also instrumental in destroying the independence of the SZFE University last year on behalf of the Orbán government.
While other cultural actors refused to tour again to the MITEM Festival, Wilson did not want to cancel the OEDIPUS tour to Budapest, as he believes that isolating the Hungarian audience is not a good way for him to express his criticism of the government’s actions. Instead, he is going to publish a statement, voicing his dissenting opinion and expressing solidarity and (financial and symbolic) support for the #FreeSZFE initiative.

The eroding situation in Afghanistan poses a threat to the lives of our colleagues in Afghanistan. Performing artists from Afghanistan were active in building up a society based on democracy, freedom, openness,  human and cultural rights in their country. These are not the values of the Taliban, so their lives are now at risk. ITI applies to democratic governments to take immediate action to save Afghanistan’s performing artists and culture activists, especially women and ethnic and religious minorities. Thousands are already sought, have moved into hiding and may soon take the perilous step of looking for a way over land borders to Pakistan or Usbekistan.

Networks and organisation have startet support initiatives: Scholars at Risk with their relocation programme and an Urgent appeal to European Governments and EU Institutions, The Festival Academy with a collection of solidarity initiatives.  See also the existing programmes for single persons of Artists at Risk and the Martin Roth Initiative.  Right now joint effort is needed from governments and culture institutions to help a very big amount of people to relocate in safe places.

The Czech Supreme Court decided in the last instance about two controversial performances from the Brno National Theatre and the Centre for Experimental Theatre. Prague’s Cardinal Dominik Duka had demanded an apology from both theatres for two productions from 2018 by Croatian director Oliver Frljić, “Condemnation” and “Our Violence and Your Violence”. Duka felt his personal rights violated since the plays had dealt with child abuse by priests and the relationship of Western society to Islamic society. The Court dismissed Duka’s appeal and decided that the plays had not been discriminatory against Christians, nor had they interfered with the right to freedom of belief.

The Action Committee for Artists Rights (ACAR) of the International Theatre Institute (ITI) follows with shock and grief the escalating mutual atrocities between Israel and the Hamas Organization in the Gaza Strip. We are mostly worried by the horrendous acts of lynching, vandalism, destruction and arson performed by extremist nationalist Jewish and Arab groups within the ethnically mixed towns throughout Israel. We call upon artists from both parties, as well as colleagues worldwide, to strongly condemn these actions fueled by blind racist and religious hatred that not only undermine the fragile co-existence between Jews and Arabs in the country, in general, and the cooperation in the field of Performative Arts in particular, but present a threat to Peace and tolerance in the entire area.