ACAR’S list of arrested Iranian theatre artists grows to 41 names: The revolution court of Tehran has announced 6 years jail sentence for Shiva Shabani, film and theater actress. She was arrested in early November in connection with nationwide protests and released on bail later that month.

Shabani was sentenced to five years for “assembly and collusion against national security” and an additional year for “propaganda against the state”. In addition to the six-year prison sentence, there is a two-year ban on leaving the country, a two-year ban on membership of political organizations, a ban on publishing in print and digital media, and a two-year ban on working in theatre and film.

The Iranian Supreme Court announced via Twitter the death sentences for 3 persons, among them the actor Hossein Mohammadi, were being revoked due to a flaw in the investigation. 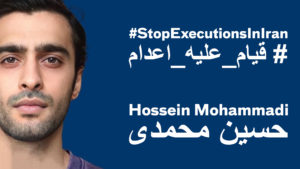 ACAR shares and supports today’s address of solidarity from the Duesseldorfer Schauspielhaus:  “Actor and artist Hossein Mohammadi was arrested during protests in Iran and sentenced to death in a summary trial. We declare our solidarity with our colleague Hossein Mohammadi and all protesters in Iran. We strongly condemn all human rights violations! We condemn the death penalty!” 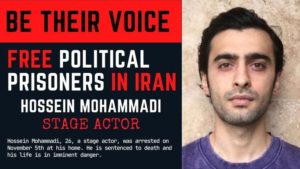 Mohammadi, 26, was arrested on Nov. 5, 2022, and has been sentenced to execution by the court of the city of Karaj, along with four other protesters. He is accused of taking part in the murder of a member of the Basij militia. The execution of the death sentence is imminent.

Update: We publish a – surely not complete – list with Iranian theatre artists who have been or where arrested or sentenced because of their participation in the political protests since October 2022 (current status December 19, 2022). The list is regularly updated and can be downloaded here.

Today, sources reported on social media that both were provisionally released from custody on bail. 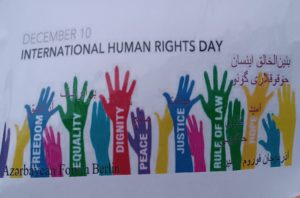 Since the outbreak of protests in Iran in September that have developed into a revolution against the political regime, protesters and those in solidarity with the protests have been persecuted and repressed with increasing use of police and military means. Among the fatalities of armed repression were many women and children. Now, at least 21 people are currently facing the death penalty, and the first executions have already been carried out. Amnesty International issued a detailed analysis about the cases.

For weeks, a large group of Iranian theater makers has been trying to publish a manifesto in Iran and abroad. This attempt failed when a few days before the publication the Iranian secret service called some of the activists and threatened them with concrete references to individual passages of the text. The pressure meant that the joint manifesto could not be adopted, but some of the authors published parts of it on private social media sites. The result was interrogation and the confiscation of private cell phones and computers. To make a statement against these repressions and to support the protest movement, Soheila Golestani and Hamid Pourazari published a video on Instagram: a street performance in which all women appear without head coverings. The text for it says, among other things, that “the truth will come out and this performance will take place”. The day after the video was released, Soheila Golestani and Hamid Pourazari were arrested and have since been held in Tehran’s Evin Prison.